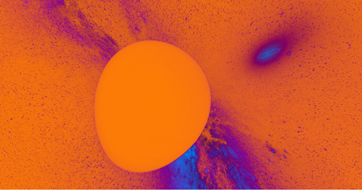 Scientists have long speculated that a “planet 9,” in orbit very far from the Sun, could explain why other bodies in our solar system have strange, hard-to-explain orbits.

Now, a pair of astrophysicists are suggesting a strange twist on that idea: that a black hole — or even a number of them — could be orbiting our Sun right now, way beyond Neptune.

This week, a pair of researchers from Durham University and the University of Illinois at Chicago published a paper outlining their theory on the pre-print server arXiv. In it, they suggest that the Sun’s orbit might have captured a free-floating “primordial black hole” — and it, or they, are still out there, circling the solar system.

In ASTEROIDS Bridge to Nowhere an asteroid storm destroys everything that has man built, forcing humankind to move below the surface to survive.

But how is it feasible or believable that an asteroid storm could occur? In writing the book, I had the help of Dr. Joe Nuth of the Goddard Space Flight Center. I sent him the draft of my concept for the cause of an asteroid storm. He told me my idea was completely wrong but was quick to suggest a legitimate cause. The result is what is written in ASTEROIDS.

So, when you read ASTEROIDS Bridge to Nowhere, I hope you find comfort in the knowledge that the asteroid storm destroying life as we know it has a scientific basis. Hint; see news story above.