Visit the new website for all the latest updates on ASTEROIDS the novel, plus I have posted several articles about asteroids, the technology in the book, asteroid news and other fun stuff.

Thanks for your interest in ASTEROIDS – Bridge to Nowhere

You can still click the link below to buy ASTEROIDS on Amazon.com 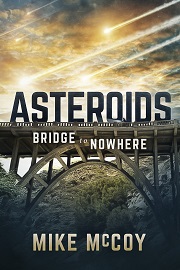 An Asteroid storm is coming.

A mysterious group within the government led by Colonel Cruikshank knew the storm was coming. They took extreme measures to keep the storm secret while building underground cities to protect the few and the fortunate. Cruikshank’s goal is that after the storm, his survivors will emerge from the protected cities as a more perfect humanity. He will create his utopian society named Arcadia, no matter what it takes.

Rick Munday is a husband, father, and struggling Astrophysicist who needs his grant approved. When Cruikshank learns that Rick’s grant proposal predicts the asteroid storm, he is drugged, kidnapped, and taken to an underground city named New Arcadia.

On his quest to escape from the Arcadians and get home to his family, Rick and new friends use their high-tech skills to warn the world of the coming disaster and expose the underground cities. Captain Kobalt, Cruikshank’s enforcer chases Rick and his friends across America leading to a climactic conflict between Rick and Kobalt.

Watch out! Tribulation will get you out there…

END_OF_DOCUMENT_TOKEN_TO_BE_REPLACED

Is this the start of something? Is Earth at Risk? Almost every week there is news of a new, undiscovered asteroid flying past Earth. How long until one comes too close? If a meteor struck Earth, how would it be portrayed in the media? Would the government invoke the Bliss Protocol like in the book …

END_OF_DOCUMENT_TOKEN_TO_BE_REPLACED

ASTEROIDS-Bridge to Nowhere has been selected as a quarter finalist for the BookLife Prize in the Science Fiction category. Wow. I’m really pleased and humbled that ASTEROIDS got this far. Hopefully ASTEROIDS will make it to the next round and be named a semi-finalist. Maybe you should read this book!